In December 1996, a certain "Mr. James Bond" called and asked aero-contact for some equipment to fight against the terrorists in Afghanistan (he was a little ahead of the time). Obviously, "Q" was not able to provide the necessary equipment…we were. For the James Bond movie "Tomorrow never dies" we provided R-3S (infrared guided missiles; for our western friends: they look like Sidewinders), UB-16 rocket pods, missile launchers and a training course for Mr. Bond (how to operate an L-39 on the ground). We got the contract on December 22 and on January 6, 1997 we had to be in Afghanistan…err the French Pyrenees with the whole equipment. No Christmas Eve, no "Happy New Year" party.

Here are the pictures: 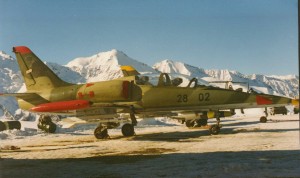 …and installed on the Ex-GAF L-39 in France.

In November 2001 we had just returned from Minden, NV when aero-contact was contracted again for some interesting helicopter work. That kept us busy till Christmas. You guessed it, Mr. Bond called again and we shipped one of our helicopters on a truck to UK. You can see this Mi-9 helicopter in the 20th Bond movie "Die another Day" released in November 2002. The Mi-9 is a derivative of the Mi-8 and used to be a flying command post – the perfect equipment for 007's mission. The helicopter has been re-painted in the studios to look identical to the flying one. Bernd flew with another Mi-8 to several locations near London. We accumulated more flight hours than Mr. Bond had requested originally…it seems as if James likes to fly with an Mi-8. 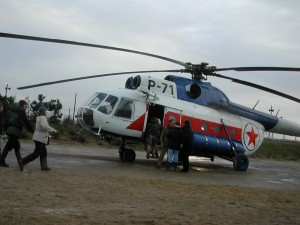 Here are pictures of the hero (we mean the helicopter, of course). And Action! Our helicopter has only a few minutes to live. 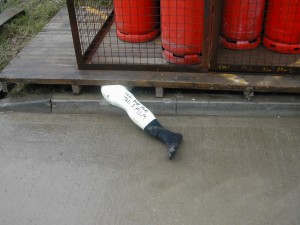 "I'll die for this film." We took this job really seriously. The bad guy hit our baby! Duct tape will not fix that…